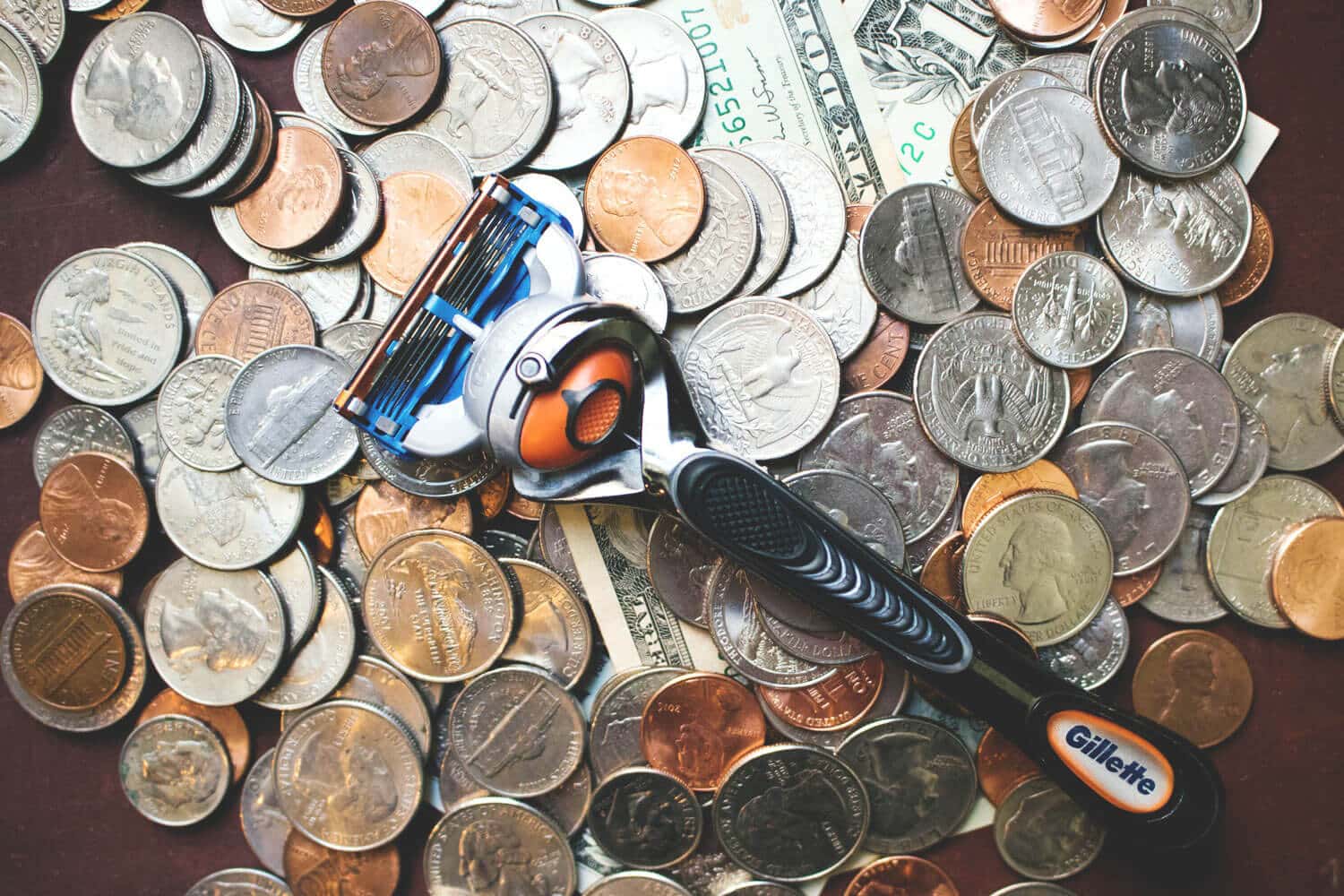 Table of Contents
1 How Many Shaves Per Cartridge Razor?
2 How Often Should You Change Safety Razor Blades?
3 How Long Does a Straight Razor Last?
4 How Long Do Electric Shaver Blades Last?
5 A Proper Shaving Routine Helps
6 How to Extend the Life of a Razor Blade
7 Wrapping it All Up

There’s a reason why Unilever bought Dollar Shave Club for $1 Billion (yes with a ‘B’) dollars:

Razor blades are expensive, and no one likes paying hand-over-fist for cartridge replacements.

Now I will admit, when I was a bit younger and strapped for cash, I would try to extend the life of my razor as long as possible.

But, this begs the question:

How many shaves can you really get per blade?

In this article, we will answer this question for each of the popular types of razors.  Additionally, we will also go over some tips to reduce your cost per blade while also extending the number of shaves you can get from your razor blade.

So, let’s dive into the cartridge razor first:

How Many Shaves Per Cartridge Razor?

By and far, the most popular razor system in the world will be the cartridge razor.

Not to be confused with the disposable razor that is a single piece, a cartridge razor is where the razor head is ejectable (i.e., think Gillette and Schick high-end multi-blade razors).

With these systems, you keep the handle but replace the head regularly.

But how many shaves should you expect to get out of a cartridge razor?

Per the Gillette website, you can expect to get 20 shaves before replacing the razor blade:

For the Schick Hydro cartridge razor, you can expect only 12 shaves before a replacement is recommended:

Note the asterisk in the image above.  This equates to the following: 4 weeks x 3 shaves per week = 12 total shaves.

Other companies, such as Barbasol, which depends on Dorco blades, are much vaguer about blade replacement:

Furthermore, when looking at the Barbasol refills, you can see that their cartridges can last you between three and six months – that’s a huge time span:

Barbasol also discloses the following information further down on the page:

Harry’s razor has a much shorter lifespan compared to others and will only last you six to eight shaves:

Here are a few important things to note:

How to Reduce the Cost Per Blade of a Cartridge Razor

If you aren’t interested in trying new brands, then the best way to save money is to buy bulk.  Larger blade refill packages will often result in a lower cost per blade.

To quickly prove this assumption, we went ahead and looked at the price of refills for the Gillette Fusion5, Schick Hydro, and Gillette Mach3 – here’s what we found out:

As you can see, with every system, significant savings are to be realized when you buy larger quantities.  The most pronounced savings was for the Fusion5.  A drop of $1 per blade when comparing the 4-pack to the 12-pack is a fairly big savings.

Another way to save is to change brands or go with an older generation razor.

How Often Should You Change Safety Razor Blades?

The safety razor, also known as the double edge safety razor or DE razor, was initially introduced in the early 1900s.  It has taken a backseat to its electric and cartridge counterparts for several years.

However, the safety razor is making a comeback – here’s why:

While not the easiest to learn, nor the longest-lasting blades on the market, safety razors are perfect for men who want total control over the shave experience.

But there is a more significant reason why men love safety razors today – they are cheap.

To demonstrate the savings, here’s how much a few popular safety razor brands cost per blade:

That’s over $3 in savings per blade when compared to a high-end cartridge razor.

However, when it comes to the lifespan of safety razor blades, they are significantly shorter than both cartridge or electric razors. You should change out your safety razor every five shaves.

This assumes that you are making three passes with your safety razor blade during every shave session:

Not doing three passes each shave may extend the life of the blade a couple of extra days.

How to Reduce the Cost Per Blade for a Safety Razor

Given that safety razor blades are already pretty cheap, there are very few ways to save additional money.  The only recommendation is to test out other blades on the market and see if you can find a bargain blade that delivers the same results as a pricier blade.

We recently outlined all the popular safety razor blades in this post.

It’s important to note that just because a blade is cheap doesn’t necessarily mean that it will perform poorly.  The lower price point may be due to the labor costs of where the blade was manufactured (i.e., German blades tend to be pricier than India-made blades).

Lastly, a variety pack is great for testing out blades from different countries at an affordable price.

How Long Does a Straight Razor Last?

Shavettes are often used in barbershops due to sanitary reasons (and perhaps local laws). The ejectable blade in the shavette is a safety razor blade that has been snapped in half.  You should expect to get five shaves from a shavette before replacing the blade.

The traditional straight razor is a bit more tricky to estimate the number of shaves you can expect. The reason being is that you’re responsible for sharpening the blade yourself with a strop. Depending on personal preference, some may sharpen before every shave while others may strop only once a week. Therefore, it’s up to you to decide how often to sharpen the blade.

How Often Should You Change a Braun Foil Head?

Braun recommends that the shaver head is replaced every 12 to 18 months:

Going longer than the recommended time may lead to hairs being pulled and general post-shave discomfort.

While some Braun foil electric shavers can cost more than $300, you can expect a replacement head to only cost approximately $40.

How Often Should You Change a Philips Norelco Rotary Head?

Per the Philips Norelco website, it’s recommended that you change out the rotary head once every 12 months:

Generally, when looking at other brands like Panasonic, Remington, Wahl, etc., you will want to check the owner’s manual or website for guidance.

To squeeze every penny out of your razor blade, the best thing you can do is to lessen the effort that that blade needs to slice through your beard.

This includes preparing your facial hair properly before shaving, using a pre-shave oil, and consider using a shaving cream that provides a well-insulated lather to retain moisture and heat.

Additionally, you can also try and reduce the number of passes with each shave.

How to Extend the Life of a Razor Blade

With repeated use, razor blades will dull and oxidize. To counteract this natural degradation of the edge, here are a few ways to extend the life of your razor blade:

Wrapping it All Up

While every shave system is unique, some baseline rules are always going to be important:

We hope this article helped provide you with some guidance on razor blade replacement.  Additionally, we also invite you to check out our guide on cutting grooming expenses if you want to find further savings in your grooming routine.

14 Ways to Prevent Razor Burn on Your Neck (and Elsewhere)

Foil vs. Rotary Shavers: Here are All the Differences

Here’s How Long Your Razor Blade Should Last

How (And Why) to Shave in the Shower

How Long to Rub Shaving Brush in Shaving Soap

How Often Should You Shave Facial Hair?

How to Dispose of Razor Blades Safely

How to Map Your Facial Hair to Determine the Shaving Grain

How To Prevent Razor Bumps From Destroying Your Skin

Is a Double Edge Safety Razor Really Worth It?

Itching After Shaving? Try This

Razor Bumps: How Long They Last And How To Prevent Them

Sandalwood: What It Smells Like, Key Benefits, Substitutes, & Where To Buy

Shave Before or After Shower? Which is Best?

Shaving Pimples: Causes and How to Prevent Them

The 5 Different Types of Razors

The Pros & Cons of Electric Shavers

What Does Shaving Cream Do When Applied To Your Skin?

Grooming Lounge Review: A Cut Above The Rest?