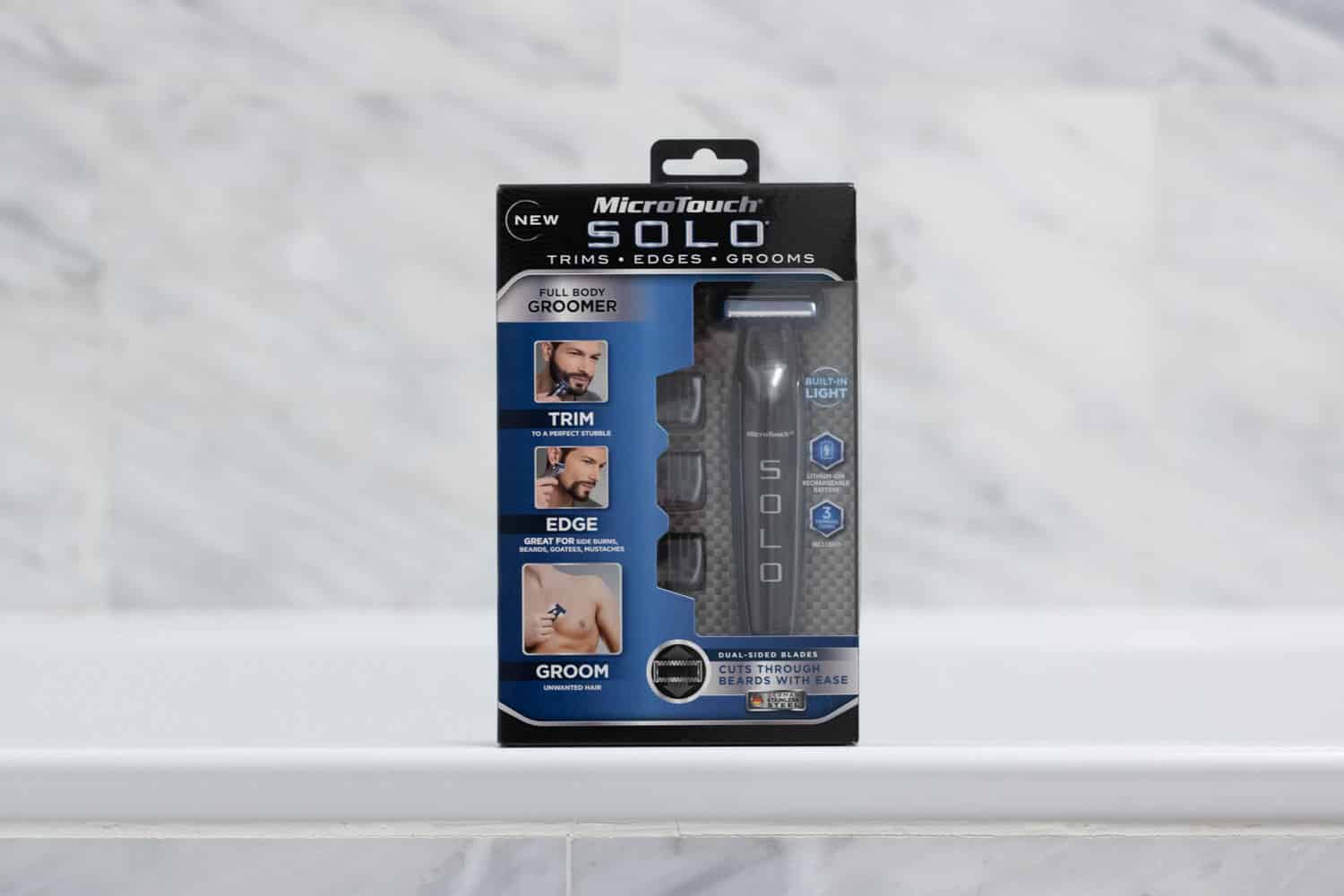 Like the Philips Norelco OneBlade, the MicroTouch Solo is a unique trimmer that blends the line between both a traditional cartridge razor and a body hair trimmer.

If you are on the fence about buying the MicroTouch Solo, we hope that we can help you.

In this review, we will share with you a detailed and honest look at the trimmer.  This includes an overview of the packaging, what’s included when you purchase it, and of course, the performance.

Review Notes: We paid for the MicroTouch Solo out-of-pocket. This is not a paid review.  This post contains affiliate links.  Tools of Men is independently owned and operated.  MicroTouch is not aware of this post prior to publication.

What’s Included with the MicroTouch Solo

Here’s an overview of the packaging and what you can expect when you buy the MicroTouch Solo:

Everything is fairly standard here.  As you can see, the MicroTouch Solo is intended for trimming, edging, and grooming:

One observation worth sharing is that the cutting blades are made from German stainless steel.

However, as you flip the box upside down, you will see that the MicroTouch Solo is made in China:

And here’s how things look on the back of the box:

We’ll be going over all the features later on.

Now for what actually comes with the MicroTouch Solo:

As you can see, the MicroTouch Solo includes the following:

The combs are also available in three different cutting lengths:

So, you have some versatility in trimming your hair to 5mm, 3mm, 1mm, or nearly skin level (with no comb attached).

The combs do have a rather pointed end:

Therefore, if you intend to use this for body grooming, we recommend that you avoid delicate areas as the poking of these combs may cause some discomfort.

What makes the MicroTouch Solo unique from other beard or body hair trimmers is the size.  At just 6″ in length, it is only 0.5″ longer than a standard cartridge razor but a full 2″ shorter than a beard trimmer:

Further blurring the lines between a body hair trimmer and a cartridge razor is the pivoting head that is available on the MicroTouch Solo.  To demonstrate, here’s how much the razor head can pivot:

When a comb is attached, the head can still pivot easily:

The head is about 2″ wide, a standard width for most razors.

Additionally, the head on the MicroTouch Solo is replaceable should it become dull after extended use or if you accidentally drop it on the hard bathroom floor and it breaks (more on replacement costs later on):

The other side is completely blocked by plastic:

What does this mean for you?

Should you only ever use the MicroTouch Solo with a comb attached, you are effectively only using half the blade.  Therefore, if it becomes dull, you are going to be replacing the head even when the other side remains sharp.

It would have been nice to see a comb that allows you to use both sides in order to get more value and improve efficiency while trimming (so you can shave back and forth – especially important if you are using this for body grooming).

When it comes to travel, the slide-on blade guard was a nice inclusion–simply slip it over the blades to protect them when the MicroTouch Solo is in your gym bag or Dopp kit:

Note: There was no mention of a power travel-lock ability with this device to prevent it from turning on while in transit.

Considering that this is a trimmer with a lithium-ion battery, the MicroTouch Solo is surprisingly light.  As you can see in the comparison image below, it weighs 59g (2.08oz).

This puts it in the same class as a standard cartridge razor and well below the weight of a beard trimmer.

Lastly, the MicroTouch Solo contains a small LED light that is built into the neck.  Similar to the Manscaped Trimmer (The Lawn Mower) that we recently reviewed, this is intended to provide you with a better view when trimming your hair:

Before you see how the MicroTouch Solo performs, here are a couple of important notes:

Here’s how my facial hair looked prior to using the MicroTouch Solo:

So given that my facial hair isn’t terribly long, I wanted to see if the MicroTouch Solo combs were still short enough to clip at least some hair.

As expected, when using the 5mm and 3mm comb, I found that it was much too long for my facial hair length:

However, the above picture should at least provide you with an idea of how bulky the head becomes with the comb attached.  To further that point, here’s how it looks when going over the mustache area:

Pretty hard to work the details, even if the head can pivot.

After going down to the 1mm comb and using it on just the right side of my face (left side in the picture blow), it cut it to just a fraction below my current beard length:

It’s very subtle – but you can notice that the cheek area in the orange box looks just a little shorter in the image above.

This is the length you should expect to get with the 1mm comb attached.  So if you prefer to have a constant stubble look, this really isn’t the trimmer for you.

When using the straight trimmer blade, the MicroTouch Solo was able to cut through my moderately dense beard growth without any issues:

The small size (without the comb attached) made working the mustache area pretty easy:

Additionally, when trimming the neck area, the pivot head made it a bit easier to work the natural contours of the face:

So here’s a quick comparison of where we started versus where we are now:

Within only a matter of minutes, half of the beard was fully removed.

Now there is one important note I want to quickly make here: When trimming this side of my face, I noticed I had a pili multigemini whisker (those really thick and fused beard hairs):

Even after passing the MicroTouch Solo over this hair repeatedly, it was unable to cut through this whisker (I counted up to 10 passes before giving up).

Therefore, if you are highly susceptible to pili multigemini, you will still need to manually tweeze or pluck them out.

Once this was resolved, I went ahead and finished up the rest of the remaining facial hair:

Here’s how both my facial hair and skin looked once I fully completed using the MicroTouch Solo:

As evident in the pictures above, the MicroTouch Solo can cut close to the skin without causing any sort of irritation or redness.  So, if you have sensitive skin and are unhappy with the performance of your cartridge razor, then the MicroTouch Solo should be considered.

As far as texture, there is a little bit of grit or stubble to the skin.  The length is comparable to about one day’s worth of growth.  This is particularly beneficial should you be susceptible to razor bumps as the hair likely won’t become ingrown.

Other Information to Consider

Here are a few other quick notes that we didn’t touch on yet but can be useful in your evaluation:

Per the owner’s manual, the MicroTouch Solo takes four hours to charge and has a 45-minute run time.

The MicroTouch Solo can be used while charging.

Expect to pay about $20 for the MicroTouch Solo.

Replacement razor heads for the MicroTouch Solo cost on average about $7.50 apiece.  They can be purchased directly from the MicroTouch replacement blades website or through large online retailers such as Amazon.

To note, there are many generic or off-brand offerings widely available online as well.  We can’t vouch for their performance.

Additionally, MicroTouch does recommend that the razor head be replaced once every 3 to 4 months.

As far as replacement combs, there are only off-brands available.  MicroTouch Solo doesn’t sell the combs individually.

The unit that was purchased did not contain a warranty card.  Even after checking on the MicroTouch Solo website, no warranty information could be found.  Should you want some protection with your purchase, consider buying this razor through a large retailer that has a gracious return policy in the event that your trimmer is defective.

The MicroTouch Solo is made in China.  On the box, the dual-sided blades contain German stainless steel.

You can either purchase the MicroTouch Solo directly from the company or through online marketplaces such as Amazon:

Unlike other beard or body trimmers that can be used in the shower or in tandem with shaving cream, the MicroTouch Solo must be used in a dry environment.

You cannot rinse the razor head off with water once you are finished trimming.  Instead, you should use the included brush to sweep away any clipped debris.

What Can the MicroTouch Solo Shave?

The MicroTouch Solo is recommended to only be used on both face and body hair.  This includes the chest, arms, legs, and back.

Given that the attachment combs have a pointed end, you should not use this trimmer on delicate areas (pubic area) as it may hurt when pushed against loose skin.  Additionally, there are no special mechanisms to prevent skin from getting accidentally nipped either.

Lastly, MicroTouch also states that this should not be used on scalp hair – important to note should you be bald.

While we hope that all the information contained in this guide provided you with a detailed look at the MicroTouch Solo. Here’s an overview of our evaluation:

We hope that this review was helpful in learning a bit more about the MicroTouch Solo and if it’s the appropriate tool to work into your grooming routine.

Be sure to come back to Tools of Men for in-depth reviews and articles on all things grooming and style.

Shawn Burns is the founder and senior editor of Tools of Men. He started this site with the goal of teaching men proper grooming habits and sensible style. Shawn’s expertise includes in-depth product reviews and how-to articles. Shawn was recently featured in the Wall Street Journal for his expertise.