Tools of Men is reader supported. We may earn a commission when you buy through links on our site.

Sure, your standard pen may serve a purpose – to write on a piece of paper.

But tactical pens, on the other hand, go well beyond just being a simple writing instrument.

You will see below that some of the best tactical pens will be multi-faceted tools that can save you from a precarious situation and are incredibly handy for everyday tasks.

Here are some of the best tactical pens that money can buy: 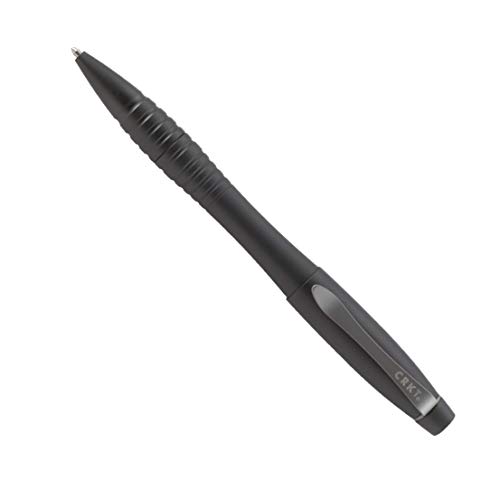 A defensive weapon that looks unassuming as a pen is a valuable resource when you are in a bind.

Tactical pens are one of the best ways to defend yourself without using lethal force, and they do not require any legal documentation like you would with a concealed sidearm.

Columbia Rivers Knife and Tool make quality defensive weapons to protect yourself safely and effectively, and the Williams Tactical Pen is no exception to that standard.

This pen features a smooth, easily gripped surface that withstands striking blows and is tapered to help you keep a comfortable grip even while writing.

The Williams Pen also breaks glass; by using the pointed end of the pen (without the pen itself being deployed), you can break through car windows as necessary to get yourself and your family safe. The pen was designed with police and military specifications in mind, so it will be sure to last you for many years, no matter what you use it for.

The pen itself is made from high-grade aluminum to withstand pressure without being too heavy. The weight of the pen itself is 6.4 ounces, so it is still weighty in terms of pen standards but not too heavy compared to other tactical pens on the market.

This makes it ideal to comfortably carry around in your pocket while being a joy to write with. It also has considerable heft while using it defensively, so it makes a good all-around tool as well.

Tactical pens are a great defensive tool that is easily concealable and does not require a permit to wield.

They fit nicely in the hand and can be used to break open windows in an emergency.

For this kind of survival tool, you want one that can be relied on when every second matters. The Gerber Impromptu Tactical Pen is a multiple-purpose pen that acts as a writing utensil and a potentially lifesaving device.

The machined steel body creates a sturdy case for this pen and can withstand blows to hard surfaces without losing its shape. In addition, the pen clip ensures that you can easily keep the pen within reach should a situation arise and is easily retrieved with a very subtle motion.

When not used as a pen, this product is an ideal defense tool, with a quick-deploy glass breaker point to escape from buildings or vehicles. Additionally, you will never be unarmed with this tool in your pocket, as any weapon in your hand is the right one while faced with an aggressive attacker.

Deploy this pen whenever you are in an extreme situation, and it may just save your life. As far as the pen goes, it works well even in water, making it perfect for jotting down quick notes for your reference or even for your daily routine. No matter what you use this pen for, it is a personal security measure that should not be overlooked. 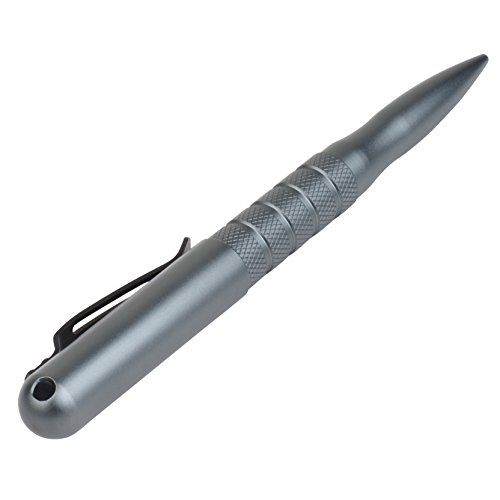 Preparedness is key when traveling alone in less than reputable areas of the neighborhood.

With the right tools, you can go anywhere with ease.

One such tool is the tactical pen, a nifty little writing utensil that doubles as a defensive shaft if things go awry. The Pocket Partners Practical Tactical Pen is a tool that works phenomenally as a simple, easy grasp, and easy wield a weapon to protect yourself against unknown dangers.

Both ends of this aircraft-grade aluminum pen can be used as potential weapons, but the blunt end of the pen makes a better thumb rest for greater control.

The entire pen is 5.8 inches long, enough to stick out and seriously do some damage when thrust toward an opponent. As for the weight, the Practical Tactical Pen weighs 1.3 ounces, so it does have some heft to it.

This weight makes it extremely comfortable to hold and write with, just a tad heavier than your average ballpoint pen. In addition, if you ever run out of ink, this pen takes a wide variety of cartridge refills, so you don’t have to worry about buying a specific brand to keep using your pen.

Perfect for home and office use. 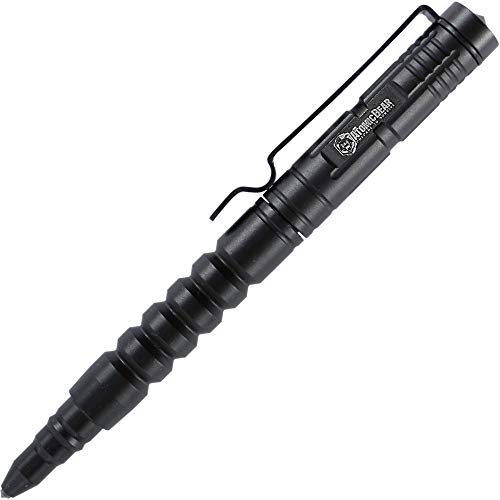 Have you ever wanted a pen that made you feel powerful?

A pen that filled you with the determination to fight for all that was good in the world? Such a pen does exist on the market, and it is the SWAT Tactical Pen. This pen, combined with the knowledge and training needed to handle these sorts of pens properly, can be an effective defensive tool. Break out of cars quickly by slamming the tungsten-carbide tip against the window, and feel the rush as you quickly escape in mere seconds.

Being attacked by a stranger in the dark? Deploy your martial skills with this pen and make a getaway. Of course, training is needed to wield this monster of a pen effectively, but with practice, you can easily defend yourself enough to get away without a scratch.

This pen is so militaristic; it comes with its own holster.

Yes, that’s right; this pen has a Velcro-closed holster to keep it safe, and drawing your pen is going to feel like you’re actually pulling out a gun.

It’s not entirely useful, but it feels good, and the pen certainly looks like a military-grade weapon. The body of this pen is aircraft-grade aluminum, which makes it aggressively sturdy.

A sleek pen that writes well is a joy to hold in the office and at home, but some pens do better than others in the function department.

The Schrade Tactical Pen is a heavy-duty pen that doubles as a defensive weapon in a pinch and has the features that make this an effective escape tool. The pen’s body is tapered down to a dull point, without any of the rough “militaristic” etchings you see on some pens. Essentially, this pen doesn’t look like a gun.

Of course, the smooth case with just a few ridges along the body brings into question its effectiveness.

A smooth body may slip out of the hand or retract back into the palm, especially if the hands are sweaty. This can be problematic if you are trying to escape from a sinking car. However, if you are looking for a cheap survival tool to carry around in your pocket, this still makes a good option.

This is also a very lightweight pen, weighing in at just under 1 oz. Many tactical pens sit between 1.5 oz at the lowest and 5 oz or more for heavier models.

The pen’s weight means you can carry it around comfortably from place to place without it weighing you down. When you want to use this pen to write, the cap screws off and on to ensure that you do not lose it.

While this may be an inconvenience to some, it does keep the lid where you need it, so you still have a whole pen. 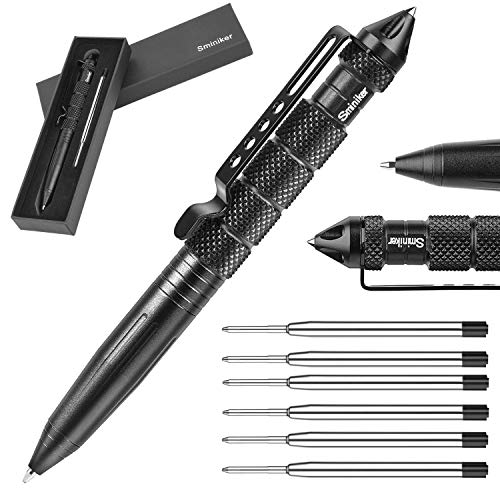 As far as mean-looking pens go, the Sminiker Professional Defender certainly takes the cake. This tactical pen is made of aircraft-grade aluminum, a sturdy material that can withstand breaks through windows, ceramic, or even dent metal.

The window-breaking tip on the non-writing end is extremely effective at not only breaking windows but warding off attackers in a time of danger.

You do not have a thumb rest with this pen and must grip it in your hand tightly as you would a knife. There are numerous instructional videos outlining the best practices with a tactical pen, which will greatly increase your survival rate.

It is otherwise a standard tactical pen, with grips along the pen’s body to enhance your hold on it.

When writing, the Sminiker boasts a smooth line and comfortable grip for an all-around multi-purpose tactical tool. You will most likely be unable to bring it on a plane with you, so either keep it in your checked luggage or leave it at home. It is a nice-looking pen, and having anything confiscated tends to be a real downer for the rest of your trip. 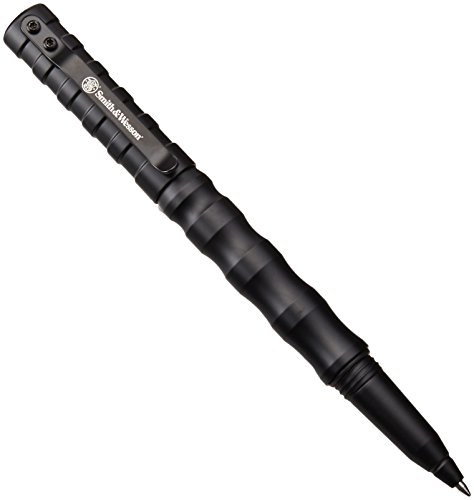 Tactical pens are handy self-defense tools that, while they do not replace traditional self-defense weapons, are handy in a wider variety of situations.

They are used as a last resort more so you can escape, than a viable fighting tool. The Smith & Wesson has tailored a pen that is comfortable to hold and easy to wear, making it easily accessible so that when you need it, you have it.

The pen features a sleek black aluminum body that is ribbed along the entirety of the shaft to give you a better grip both in an emergency and out of one. The cap attaches to either end easily with just a click, so you can use it for writing or smashing windows with the built-in window smasher.

The pen’s cap does seem to have some issues; it is lined with a plastic insert to help keep the lid on, and many buyers have expressed dissatisfaction with this insert breaking after only weeks of use. It is an unfortunate flaw in an otherwise satisfactory pen.

As the lead editor of Tools of Men, Adam is an expert in all things men's grooming and style. When you don't find him reading up on the latest style trends, he likes to go jogging, attempt to distinguish the differences between IPAs, and play sports with his kids.